Home The destination Experiences A stopover in Roissy

I work in a tailor-made tourist, cultural and professional travel agency for groups, based in Belgium.

This year, I am in charge of organizing an eductour in the Faroe Islands for 13 people: ten travel agents, a press officer, a colleague and me.

Our Thalys train must arrive at Roissy Charles de Gaulle at 9:37 am. Our flight from Paris takes off at 16:50 p.m. I wonder how to occupy my guests during this long stopover time. An idea comes to mind: contact the Grand Roissy Tourist Office to be advised on the places surrounding the airport that can be visited. This will allow us to wait in a framework of discovery but also to show the participants of the eductour that Roissy does not only rhyme with airport and business tourism but also with culture and discovery.

What was my surprise to learn that the office has a group service able to organize such a getaway for us.

My contact introduced me to the large tourist offer in the Grand Roissy region, which includes the cities of Roissy, Luzarches, Écouen, Le Mesnil Amelot and Gressy.

“A territory where each village, castle or museum tells a colorful story, in the heart of landscapes that have remained authentic. This natural setting less than 30 km from Paris offers an incredible range of activities to recharge your batteries or compose moments to live intensely: outdoor sports, golf courses, spas, walks, shopping, gastronomy ... Roissy, the destination where business rhymes with relaxation ”as described by their beautiful Destination brochure.

The choice of the visit

Our stopover time, not allowing us to go too far away, our advisor suggests that we schedule a visit to Roissy or one of the neighboring towns, Le Bourget.

We decided to visit the Air and Space Museum at Le Bourget.

The first visit would still allow us to discover during a 20km journey by coach, terminals 1 and 2 as well as their 6 terminals, the charter terminal, the 4 runways, the 3 control towers, the freight area , the new S3 and S4 terminals dedicated to Air France and 2G to regional aircraft. We would have discovered the future extensions and would have been impressed by the incessant ballet of Airbus, Boeing, Embraer and others… including the giant of the air: the AIRBUS A 380 with the Concorde exposed in the center of the airport!

We would also have passed in front of the future golf course of Roissy located in the heart of the Green Valley, huge of 90 hectares. This visit would have revealed to us how Roissy evolved from agricultural village to the status of city hosting the 1er European airport.

Let's go back to our stopover.

We are therefore taken care of by our group manager who greets us in person at the Roissy Charles de Gaulle station. Without further ado, we go to the Air and Space Museum by private bus.

After 20min drive, we arrive. We are expected on site by our guide who is about to introduce us to an extraordinary museum.

The Air and Space Museum is a State museum dependent on the Ministry of Defense. Built on two sites: the former Le Bourget terminal which measures 125 m² and a second, of 000 m², which is located on a former Air Force base on the other side of the airport, in Dugny its vocation is " to ensure the conservation and enrichment of State collections, as well as the presentation to the public of the historical and cultural heritage in the field of aeronautics and space et preserve the memory of the Le Bourget site linked to its establishment in Le Bourget ”.

We discover an exceptional collection of more than 150 planes, helicopters and rockets including the Soyuz and Ariane 5.

In the north wing we learn about the permanent exhibition "The pioneers of the air" which reveals rare pieces: canvas or wooden airplanes. Eyes wide open we return to the past.

A magnificent room, out of time, reveals the famous story of the conquest of space. Apollo Mission, does that mean anything to you?

Impossible to make this visit without crossing the exhibition halls of periods of wars: "1939-1945" but also "Between two wars" where we live an immersion close to reality, recreating the noises and the stress felt by the paratroopers allies in some devices.

We end this wonderful visit from the outside and inside of two Concorde: the prototype of the famous test pilot André Turcat and one of the Air France series aircraft.

After two hours of extraordinary time travel, we take the return road towards Roissy-en-France.

We start our afternoon with a lunch in one of the partner hotels of the Tourist Office. A space has been set up for us as a group. The meal is served in the form of a very varied buffet. We regain strength before the rest of the trip. Our group leader took care to include cold and hot drinks in this sweet meal.

Finally, our coach before dropping off at the bus station, makes a detour via the Aéroville shopping center which opened in September 2013, for a brief shopping spree before the big departure. This modern shopping center, on one and the same level, offers a rare customer experience in Ile-de-France. Indeed, it has a set of 144 shops and 32 restaurants including a special area dedicated to them. There is also a 15-screen cinema including the famous Dolby cinema, 4DX and Premium, two escape game concepts: Virtual Time and Team Breack, and a concierge.

We did not see the time pass and leave with our heads full of beautiful memories!

This gives me ideas for my next stopover groups. We will take the time to visit the rest of the territory because our guide aroused our curiosity by telling us about the city of Écouen and its rich historical heritage, The Archéa museum dedicated to the archeology of the Pays de France or Luzarches and its commented walks. 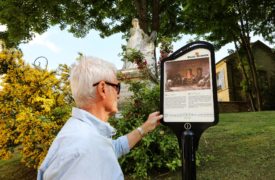 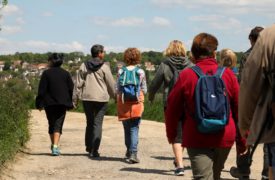