Home The destination Experiences Sport What if I hiked in Luzarches?

And why not stroll first, a bit in this beautiful little town with a somewhat medieval feel?

I survey them steep alleys et saunters in the bowels of the old town, made of worn stones by time and which remind me of its rich past hours. The Saint-Côme gate is ideal to start this walk. It constituted the main gate of the city and gave access to the castle. Dating from the XNUMXth century and enhanced in the XNUMXth, I can still observe, looking up, a stunner and a hollow path where the portcullis was sliding. For Anecdotally, it is this original setting which was used to shoot a scene from the film "Visitors II". Arrived at the top of the hill, on the Saint-Côme plateau, I see the keep of the medieval castle with its buttresses.

A collegiate church was built there in 1180 to store the relics of Saints Cosmas and Damians, brought back from the second crusade. Destroyed during the French Revolution, I can still see, well hidden behind the trees, traces of Gothic arcades. It is also on this plateau that we found vestiges dating from the Neolithic. Then going down by charming stone staircases, I discover the hall. Dating from the XNUMXth century, it is the focal point of Luzarches. Festive activities, fairs and more were organized there (and still today!) ... I take this opportunity to relax and sip a lemonade on the terrace of a café.

A little further, place de la République, I imagine well the fairs and other booths with spectacles which attracted from everywhere, merchants of wine and cattle. Not far from there, well hidden behind a high wall, I can see one of the last feudal mounds of the Val d'Oise and the Château de la Motte. This fortified castle some remains defended the eastern access to the town. Dating back to the XNUMXth century and of massive construction, it had something to calmly await the enemy!

And then, of course, you have to go past the church, starting point for my future hikes. The Saint-Côme-et-Saint-Damien church was built on the very site of a church mentioned in 775. A quick visit allows me to see its beautiful XNUMXth century chapel. I also take a look at its Romanesque choir with its cul-de-four vault dating from the XNUMXth century or its arks presenting scenes from the lives of the two saints.

This little walk through Luzarches ends slowly walking the streets of the city. I go in search of small streets supplying water to washhouses, drinkers, or other fountains; places where the life of yesteryear also flowed wisely. Ah, I almost forgot ... you have to look up from time to time to look at the few XNUMXth century villas. Built by bourgeois families who came to enjoy the calm of the countryside near Paris, they are worth a look.

The city of Luzarches can also represent a good starting point for hikes. First of all with the establishment of "4 clover loops", I can ; from the parking lot of the Saints-Côme-et -Saint-Damien church; radiate on 4 hikes at distances varying from 4 to 12 km. Intended for discover the vast territory which adjoins the city, they are aimed at both "Sunday hikers" and more experienced hikers. Tracks are marked with numbered clover. They allow you to discover forest or rural paths, old buildings or remarkable viewpoints of the Lucerne landscape. 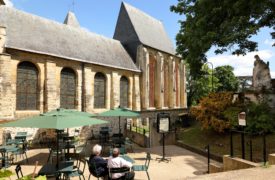 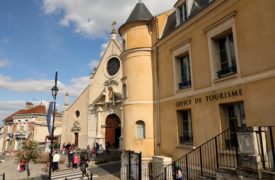 A stroll in the city center of Écouen ... 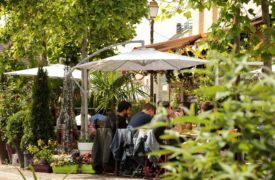 Roissy village, calm at the foot of the slopes